Two twin knights who originated from an apathetic, talking fish set out on an adventure. The first knight finds a dragon, slays it to save the princess, and then marries her. He seeks out a mysterious enchanted castle with echoing spirits and is tricked into falling into a cavern by an old witch. The second knight, his twin brother, stumbles upon the city where his brother was crowned king and is curious as to why the people think they recognize him. He deciphers that his brother set off to the enchanted castle after talking to the princess and then tricks the old witch who resides there into saving his brother, all the knights who came upon the castle before him, and all the beautiful women who were sacrificed to the dragon.

This tale is different because it is almost two tales in one, as well as because the previously slain men and the women who were sacrificed come back to life at the end. There is one color illustration for this tale.

US, England, and India

An apathetic, talking fish befriends a hungry cobbler who allows the cobbler to eat him and bury part of his flesh in a garden. The garden grows larger and spits out two twin babies that eventually become men. They decide to leave home one day after being tired of mistaken for each other and vow to return home if anything noteworthy happens. The twin who took off toward the East encountered a solemn city with every citizen weeping because this year their princess was the beautiful girl chosen to be sacrificed to the dragon. The eastern twin saves the princess by tricking the dragon with its own reflection. When the dragon fights the mirror that tricked him, the eastern twin slays the dragon and saves the princess. The eastern Knight of the Fish takes the princess’ hand in marriage as a token of the King’s gratitude for saving his daughter. The eastern Knight of the Fish sees the enchanted Castle of Albatroz in the distance and rides off to see it in the morning. The echoes of the castle awake an ugly old woman who resides there. She gives him a tour of the enchanted castle and leads him into a dark room where he falls through a trap door. Meanwhile, the western-riding Knight of the Fish stumbles upon the village of his twin brother’s princess and is curious as to why everyone thinks they recognize him. The princess is happy to see him and asks what the enchanted castle has, but he says he has to return before he can tell her. The western Knight of the Fish confronts the old lady and she is fearful of him. She gives him a task of bringing her back to life with some ingredients from the garden before she lets him know where his brother resides. The old lady shows him his brother and those who fell before, and they come back to life with the same magic potion constructed. The western Knight of the Fish also found a cavern of all the bodies of the girls who had been sacrificed to the dragon and also brought them back to life. The castle fell as the old lady died at the rage of her captives escaping. 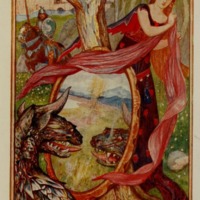 This item was submitted on April 14, 2020 by Montana Thompson using the form “Submit a Fairy Tale” on the site “Fairy Tales Repository”: http://fairytales.suzannemagnanini.buffscreate.net/s/ft