The illustration in this version is very colorful and intricate, almost dream-like, and gives a detailed image of Beauty and the beast once he is a prince. This illustration is at the end of the story, however, allowing the reader to form their own mental images of the characters first. Additionally, this version deals with class and gender roles. The merchant starts out rich, but loses his money, which causes the story to unfold. There is no mention of regaining wealth, however they do end up with the prince at his palace, so it is implied. Throughout the story, Beauty displays what may be a message to women about their role in society and what they have to do to be proper ladies. Beauty is constantly doing housework and taking care of her father without complaint, and eventually agrees to marry a beast. She is rewarded for these actions by the beast turning into a handsome prince, her prideful sisters being enchanted, and her father being able to live with her in the palace.

Beauty and the Beast

A rich merchant has three beautiful daughters, the youngest of which is kind and caring, while the older two are vain. He comes home one day with the news that they’re no longer rich and must move to a small village. The youngest daughter, Beauty, is excited for their new life and continues to do all of the housework cheerfully, while the older sisters complain about the change in status. The merchant notifies the daughters he has to go on a business trip to a nearby town and asks them what they would like him to bring back as gifts. The oldest daughters want diamonds and pearls, while Beauty asks for white roses. While on his way home from doing business, the merchant gets lost in the dark and ends up in a palace with no one in it. He finds food prepared on the table, eats it since no one is around, and then goes to bed. When he awakes, he finds a nice embroidered suit, puts it on, and then finds breakfast prepared and eats that. On his way to the stable to see his horse he finds a rose bush and started gathering white roses for Beauty, when he was approached by a beast. The beast is outraged that after feeding him and setting out a nice suit for him, the merchant decided to steal his roses. In exchange for not killing the merchant, the beast demands that in a month he bring back to the palace the first thing he sees when he arrives home. Upon his return, to the merchant’s dread, Beauty is the first thing he sees when he arrives. After the merchant told her about the deal, Beauty is set on him upholding it and, after a month, goes to the palace with her father. The beast assures the merchant that Beauty will be safe with him and sends the merchant back to his village the next morning. While crying about saying goodbye to her father, Beauty finds a mirror with a comforting message written in gold, “Little Beauty, dry your eyes, Needless are those tears and sighs; Gazing in this looking-glass, What you wish shall come to pass.” Beauty spent the following days entertaining herself by painting, playing, and gathering flowers during the day, and then at night the beast would come into her room and they would chat. One day during their chat, the beast asked Beauty if she would marry him, but she quickly turned him down because he’s a beast. The next day, while looking at her engraved mirror, Beauty wished she could see her father. In the mirror then appeared an image of her father alone and ill in bed. This broke Beauty’s heart, and she became very sad. The beast then let her return home to see her father with the expectation that she would return in a week and signal when she was ready by placing a ring on her table before bed. After spending a week at home taking care of her father, Beauty couldn’t get herself to leave just yet and spent another couple days at home. One night, she had a dream that the beast was lying in his garden saying he would die without her. This caused her to worry and she placed the ring on her table, then the next morning awoke in her room at the beast’s palace. She waited for the beast to come in and chat with her, but he never showed, so she went to the garden to see if her dream had been true. Sure enough, the beast was lying in the garden near death. At the sight of this, Beauty agrees to marry the beast. He then turns into a handsome prince and informs Beauty that a fairy had enchanted him to be a beast until a beautiful woman would agree to marry him. They get married with the company of Beauty’s father, and the sisters are turned into statues. They live happily ever after. 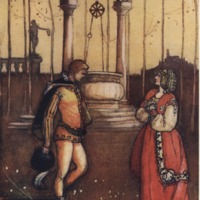 This item was submitted on April 17, 2020 by Becca Reder using the form “Submit a Fairy Tale” on the site “Fairy Tales Repository”: http://fairytales.suzannemagnanini.buffscreate.net/s/ft