Perrault’s version of the tale focuses more on the prince’s mother than on Sleeping Beauty. This translation of Perrault’s tale includes nine black and white illustrations. Except the scene of the fairies at the Christening which is a full page illustration, all of the images are smaller and embedded in the text of the tale. Instead of captions, there are phrases in italics that link the text to the images.

Perrault’s version of Sleeping Beauty is quite different from versions popular today. When the king and queen fail to invite an elderly fairy to their daughter’s Christening, she arrives and curses the child. Another fairy, who had not yet bestowed her blessing on the child, states that when the princess wounds her hand on a spindle, she will fall asleep for 100 years, rather than die. While her parents are away, sixteen-year old Beauty discovers an old woman spinning and pricks her finger falling into a deep sleep. A fairy, summoned by a dwarf in seven league boots, returns to put the entire castle and all who work there under a sleeping spell and then. One hundred years later, a prince makes his way to the castle, falls in love with her after hearing her story, and enters Beauty’s bedroom just as she awakens. The two marry and have two children, Aurora and Apollo, but the prince does not tell his mother of his new family until two years later when the King dies. Perrault’s version differs from the versions popular today, because the second half of the tale includes the prince’s mother, who is an ogress. The Ogress Queen wishes to eat Beauty and her children while her son is away at war, but her plan is foiled by a kind cook who save the family and serves up various animals. At the end of the tale, the Queen commits suicide by diving into a vat of poisonous snakes when she had prepared to kill Beauty, the children, the cook, and his family. 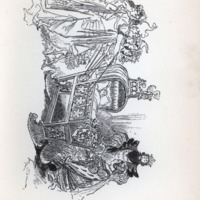 This item was submitted on April 17, 2020 by Olivia Gold using the form “Submit a Fairy Tale” on the site “Fairy Tales Repository”: http://fairytales.suzannemagnanini.buffscreate.net/s/ft