In this version of this Sleeping Beauty tale based on Charles Perrault’s tale, the princess is awakened by just the presence of the prince. Also, in this tale the prince's mother, the queen, is "of the race of Ogres", which like to eat little children. The prince hides his marriage and children from his mother because he is scared she will eat them. The queen tries to eat the children and the princess but the cook feeds her goats instead. In the end, the queen ends up taking her own life by jumping into a pit of toads, vipers and snakes of all sorts that devour her. There are three black and white illustrations depicting: the newborn princess in her cradle as the old woman curses her; the prince making his way though the hedge; and Little Day, Sleeping Beauty’s son, fencing with a monkey.

A King and Queen have a daughter and invite all the fairies to come and bestow a gift on the princess. There is a one old fairy who has not been invited and shows up to the gathering unannounced saying that the princess will die when she pricks her finger on a spindle. One good fairy hid so that she may give her gift last and gifts the princess a rest for one hundred years that will also affect some of the workers in the castle. A prince, from a different family, comes upon the castle and wakes her from her sleep when he finds her they marry that evening. The prince does not tell his parents, the king and queen, of his marriage or children because the queen is an Ogress and has trouble suppressing the Ogreish tendency to eat people. After the king dies, the prince becomes king and engages in a battle that takes him away from home. While away the queen asks her cook to prepare each child and the princess so that she may eat them, but the cook instead serves her goats and a hind. When the queen finds out she has been tricked, she arranges a tub full of various snakes and toads to be brought before her and decides to throw the princess, her grandchildren, the cook and his family into the tub to be devoured. At the last minute the king returns and the queen throws herself into the tube of snakes and dies. The king is sad but feels comforted by his wife and children. 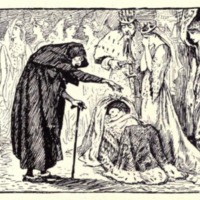 This item was submitted on April 17, 2020 by [anonymous user] using the form “Submit a Fairy Tale” on the site “Fairy Tales Repository”: http://fairytales.suzannemagnanini.buffscreate.net/s/ft