Cruikshank created six full-page etchings to accompany the tale of Hop O’ My Thumb that depict nine scenes from the story. Not only does Hop O’ My Thumb leave a trail of white pebbles so he and his brothers can find their way out of the woods, he also marks trees with his knife, a practice Cruikshank says in a note is typical of Native Americans: “This is what Indians do—they notch trees and so find their way through the largest forests” (p. 9). Cruikshank includes comical asides. For example, Hop knows how seven-league boots work because he read about them in a book acquired from London printer and bookseller, Mr David Brogue of 86 Fleet Street.

George Cruikshank participated in the Temperance movement, and like other tales in this volume (Cinderella), this version of Hop O’ My Thumb denounces the evils of “strong drink” (alcohol). He also omits the violent scene in which the Ogre kills his own children after being tricked by Hop into thinking they are the 6 brothers. The story begins with a Count who loses all his money by drinking and gambling and must turn to cutting wood in order to support his family. He and his wife the countess have six boys, the smallest one called Hop O My Thumb, or Little Hop. Although tiny, Hop is exceptionally intelligent, sweet, and strong. The count is unable to support his family because he continues to drink and smoke and soon plans to abandon the boys in the woods, rather than watch them starve. Hop overhears the plan and uses white pebbles to mark the way so that the boys are able to return home. After this, the count manages to earn money by writing for a farmer and the family is happy for a while. The mother leaves to find her brother the Baron, and the father resumes drinking and once again abandons the boys in the woods. Hop has used breadcrumbs to mark the trail, but birds eat them. Spying a light in the distance, the boys arrive at the home of a Giantess and her alcoholic, Giant-Ogre husband. The Giantess hides the boys for fear her husband will eat them. When the Giant-Ogre discovers the boys, the wife claims she hid them only to fatten them up and locks them in a room. Hop manages to steal the key and escapes with his brothers. The giant discovers this, dons his seven-league boots, and sets off in pursuit, but falls asleep before finding the boys. Hop steals his boots and brings them to the King, who rewards him and makes the Count his prime minister. All the giants in the land are rounded up and carry out useful labor for the kingdom. Hop’s father the count passes a series of laws outlawing drinking and gambling and promoting public or private education for all children. 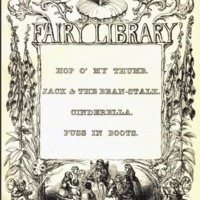 This item was submitted on April 17, 2020 by Nate Jones using the form “Submit a Fairy Tale” on the site “Fairy Tales Repository”: http://fairytales.suzannemagnanini.buffscreate.net/s/ft