This book contains a preface that introduces a framing narrative, however, the narrative is never addressed again throughout the book. Each story is told one after another, with its own separate beginning and ending, and there are no further references to the frame tale after the first tale. Through the preface, in which a young girl named Sunflower speaks with her mother, we discover that the tales contained within this book are targeted towards children as they are retold by the mother. Sunflower praises her mother’s story telling because she “leave(s) out all the not interesting bits you know and make me understand what the story is all about.” This Sleeping Beauty Tale is concise, easy to read, contains little character development, and is very clean (no gruesomeness). As these stories are retold again, the preface addresses two individuals, Mary de Morgan who was an English writer, as well as the publisher Messers. Macmillian, who both “lent” some of these stories to the author.

This classic tale of Sleeping Beauty follows the story of a young princess whose seven fairy godmothers, gifted her beauty, good thoughts, kindness, the ability to dance like a fairy, sing like a nightingale, and play the harp. However, one wicked old fairy unwelcomingly granted that the child, at the age of 15, would prick her finger on a spindle and fall into a sleep. One of the fairies who had not yet given her gift, granted that the princess would not die but fall into a 100 year sleep. The girl grew up and possessed all the gifts. Eventually, she stumbled upon a spindle, pricked her finger, and she, along with her entire castle and everything inside and out, fell into a sleep. After 100 years, and the son of the new King finds the castle and makes his way up to the chamber in the turret where the Princess lies. As a wise old man said legend had it that she may only be woken by the Prince who will marry her, the young Prince kissed the Princess and she awoke immediately. The rest of the castle and people are restored and the two fall in love. Very soon after, they were married and lived happily ever after. 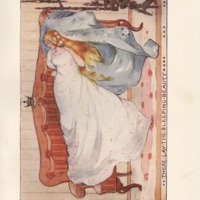 This item was submitted on April 17, 2020 by Jasmin Breakstone using the form “Submit a Fairy Tale” on the site “Fairy Tales Repository”: http://fairytales.suzannemagnanini.buffscreate.net/s/ft