A princess lives in the palace with her parents the king and the queen, surrounded by interesting people and horses, and a donkey with big ears that, instead of producing waste, produces gold coins. The queen grows ill, and makes the king promise to only marry another woman as wise and beautiful as she. The queen believes he will never find such a woman, but in fact the king falls madly in love with the only woman who can surpass the charms of the wife, his daughter, the princess.

The princess runs away, wearing the donkey skin and carrying her godmother's magic wand, which has the power to summon a magic chest packed with her dresses and toiletries. She finds a farmer to take her in as a servant. The valets call her "Peau d'Asne" (Donkey Skin) and make fun of her. On Sundays, alone in her room, she admires herself in the beautiful dresses.

One day, the Prince Cephale sees her in her beautiful dress, and is consumed with love and desire, and tells his mother, the Queen, that he wants Peau d'Asne to make him a cake. Peau d'Asne, perhaps by accident, or perhaps intentionally because she senses she is loved, bakes a ring into the cake. To heal his yearning heart, the court searches for the woman whose finger will fit the ring, who will become the Prince's bride. All the women of the town attempt to carve down their fingers to fit the dainty ring. Finally, Peau d'Asne fits the ring. She presents herself to the court in her finest dress. At the wedding, the fairy godmother reveals the entire story, and Peau d'Asne is crowned with glory and reuinted with her father, whose desire has been tempered with time.

Peau d'asne is written in verse. The king desires his daughter. The moral of the story is given in that virtue which survives an unfortunate challenge will always be rewarded. Perrault points out the importance of having beautiful clothing, and says that there is not a woman under the heavens that doesn't believe herself the most beautiful. There is a dedication written in verse to the Madame la marquise de L... extolling the virtue of fairy tales in general. There is a footnote defining the word ogre. He alludes to the feminine transmission of tales, mentioning mothers and grandmothers who will keep this story alive in their memories. 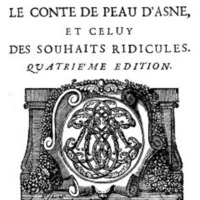