A miller dies and leaves all he has to his three sons. The third and youngest is willed only a cat, to his dismay. He complains out loud that once he has eaten the cat and made a muff of its skin, he will have nothing left. The cat, who has overheard, asks for a bag and some boots, and tells his master not to worry.

The cat uses the bag to catch a rabbit, and takes it to the King, offering it on behalf of Monsieur le Marquis de Carabas, a name he has invented for his master. The king is thankful. The cat repeats the action several times over two or three months. One day the cat knows the King is taking a ride with his daughter, so he has his master bathe in the river along the route, then hiding all of his master's clothing under a rock. When he sees the King approaching, he cries for help, explaining that the Marquis is drowning, and that someone has stolen his clothing. The King has his guards save the would-be Marquis, and fetch him a fine outfit to wear. When the well-dressed Marquis enters the carriage, the King's daughter falls in love with him.

As they ride, the cat proceeds ahead, and threatens those working in the field to say that the lands belong to the Marquis de Carabas, or he will chop them into mincemeat. When the King's carriage comes along, they follow the orders of the cat. The cat repeats the ruse with the harvesters in the next field, and with all those he meets, and all do as ordered. The king is impressed with the vast holdings of the Marquis de Carabas.

The cat gets to a great castle where an ogre lives, the true master of the lands they have passed through. He tricks the ogre into turning himself into a mouse, and then eats him. When the King arrives at the castle, he is so thoroughly impressed with the Marquis that he gives him the hand of his daughter. They are married that day, and from then on the cat, now living a comfortable life, only chases mice for fun.

The moral of the story is written in verse following the tale. It states that, though a rich heritage is a great advantage, the industry and know-how of ordinary people is worth more. A second moral is given that fine clothing, youth and a handsome face are valuable to inspire tenderness. 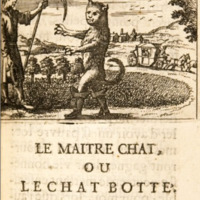