A king and queen, after much time, finally have a child, a baby girl. They invite all the fairies in the kingdom to be her godmothers. At the feast after the baptism, the seven fairy godmothers are each given a magnificent place setting made of gold and embellished with diamonds and rubies. One more fairy arrives unexpectedly, as she had been in hiding for over 50 years, and is welcomed at the table, but there is no place setting for her. Each fairy offers the child a great talent or quality, except the unexpected guest, who feels slighted. She declares that the girl will pierce her hand with a spindle and die. One of the invited fairies, expecting trouble, has saved her gift for last. She declares that, though she is not powerful enough to overturn the curse, she will amend it so that the girl will fall into an enchanted sleep rather than die, and after 100 years a prince will awaken her.

The King forbids spindles in the kingdom, but the Princess, after meeting an old spinning woman unaware of the edict, indeed fulfils the prediction. A dwarf with boots of seven lieuës (ancient measure of distance) quickly travels a long distance to alert the Fairy, who arrives in an hour in a dragon-drawn carriage. She puts the Princess's cohort to sleep around her and surrounds the tower with a forest of spines.

After 100 years, a curious prince approaches the tower and the forest opens a path. He kneels before the sleeping Princess, who awakens, and all of the palace with her. They marry, and have two children, a daughter named l'Aurore (dawn), and a son named le Jour (day). All the while, the prince has been hiding his union from his mother and father, because his mother is an ogress whom his father has married only for her wealth. After the death of the father, the Prince comes forward with his family to take his position as king. When he must leave for battle, his mother decides she wants to eat the children, as is the ogress's custom. She orders the butler to bring her l'Aurore in a sauce robert, but he brings her a lamb instead. She next wants le Jour, but he brings her a young goat. Finally, she wants the young Queen. The butler tells the young Queen what has happened, and that he has hidden the children at his own house, and they give the ogress a doe in sauce. One day, the ogress hears the children and realizes she has been tricked, and so orders the butler be thrown into a pit filled with toads and snakes. The King returns home unexpectedly, and the ogress throws herself into the pit headfirst.

The Sleeping Beauty tale most known in the US ends just after the awakening of the Princess; this version has a second half that includes her children. The moral, included after the tale, is that one should not rush to marry, though Perrault concedes that he could not preach this to the sex with so much ardor to marry. (le sexe avec tant d'ardeur) 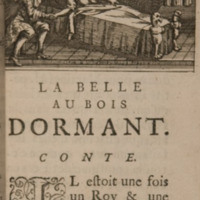