The king and queen have a beautiful and beloved daughter named Gracieuse, who is admired far and wide. The ugly duchess Grognon is filled with jealousy. The queen dies, and after a year of mourning, the king goes out on a hunt and stops at the duchess's castle. He discovers she is enormously rich, and she promises to share her wealth with him, if he marries her, and if she can take control of Gracieuse as her stepmother and mistress. The king agrees.

Gracieuse is dismayed at the news, and goes to cry alone. Percinet appears. He is a handsome prince that has been in love with Gracieuse in secret for some time. He reveals that a fairy has given him a gift and he will protect Gracieuse with it. He gives her a horse and leads her upon it to meet Grognon. Grognon is infuriated that Gracieuse, with her beautiful horse led by the handsome prince, gets more attention than she does. Grognon demands the horse and the young page (Percinet) to lead it. With the wedding procession following, the horse darts off, with Grognon's foot stuck in the stirrup. She is dragged through the mud and the spines, breaking her arm and head. While recovering, she is convinced that Gracieuse has tricked her. Grognon orders that Gracieuse be stripped and beaten with canes, but Percinet changes the canes into feathers and charms the eyes of Grognon's women to believe that the punishment has been delivered.

To please Grognon, the king has a portrait painted of her, and organizes a tournament for the best knights in the court, all fighting to assert that Grognon is the most beautiful princess in the universe. An unnamed knight arrives, insisting that Grognon is the ugliest, and that he has with him a painting of the most beautiful. He defeats twenty-four knights before revealing the painting of Gracieuse. Gracieuse knows this knight is Percinet.

Grognon has Gracieuse abandoned in the middle of a dense forest. She calls for Percinet, and sees a path opening to a crystal palace. Divided by her feelings, she turns away from the palace. He appears, and assures her of his respect, explaining that his mother and sisters, who already love her, are in the castle. They go by a carriage drawn by deer into his enchanted land of joy and beauty. In the fairy castle, she finds that her story is being engraved on the walls.

All is perfect in this land, yet Gracieuse wonders if she can trust Percinet, and thinks that this must all be enchantment. She tells him she is duty-bound to her father, and must return. He shows her that Grognon has told her father that she is dead by suicide. The king is distraught, crying day and night. This scene makes Gracieuse's will to return even greater. Percinet must obey, but as they leave, all the enchantments crumble behind them, and he tells her that she will only be able to return after she is buried.

Gracieuse returns to her father, who has the coffin disinterred and sees that Grognon has buried a log. Nonetheless, Grognon convinces him that Gracieuse is an imposter, and he abandons his daughter anew. Grognon consults a fairy to invent torments for the princess. They first lock her in a room and give her a tangle of fibers, large as four people, that she must untangle without breaking a thread. Certain that she will not succeed, she cries her last farewell to Percinet, who appears, saying he could not abandon her, and uses his magic wand to untangle the huge knot. He asks her to free herself from this tyranny and come with him, yet she again refuses.

Grognon gives Gracieuse a ton of feathers and orders her to sort them by bird. Again Percinet appears and helps complete the task. Grognon then gives Gracieuse a magic box that the fairy had created, and tells her to deliver it but forbids her from opening it. On the journey, Gracieuse cannot help herself, and opens the box, from which springs a court of tiny people, who begin a great ball in the field, dancing and cooking. Once they have started, Gracieuse cannot convince them to go back into the box. Percinet arrives to help her, pointing out that she only thinks of him when she is in trouble.

Grognon has a pit dug, and a giant rock placed over it, and tells all that there is a treasure buried beneath the rock. When Gracieuse tries to reveal the treasure, Grognon pushes her in the pit. Gracieuse regrets her decision to not marry Percinet sooner, but explains that she needed to be certain that his love for her was unchangeable. A door opens in the pit, and Gracieuse finds the crystal palace and the sisters and mother of Percinet. She agrees to marry him. The evil fairy who helped torture Gracieuse is present at the wedding. She casts a spell to make Gracieuse forget the torments, and returns to wring Grognon's neck.

Grognon has a wine cellar, and mentions several types of wines. The beauty of Gracieuse is compared to Venus. Initially, Gracieuse is insulted to be admired by Percinet when she believes him to be a Page, and considers his admiration a sign of how low she has fallen. The dangers of love are comparable to the tortures of the evil stepmother. At the end of the story is the moral, written in verse, in which Envy is blamed for human evil, and for the anger of Grognon. 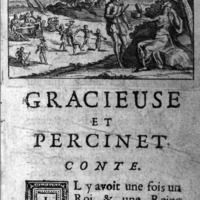